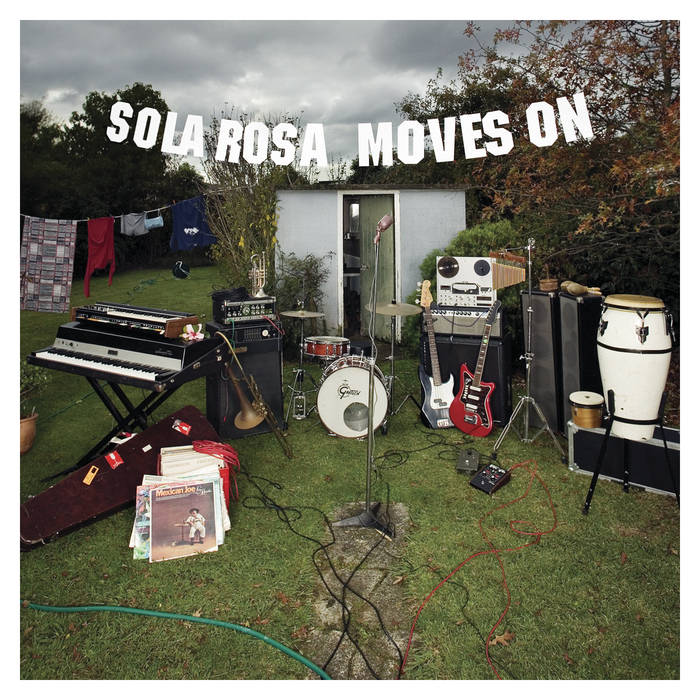 Same Captain, New Crew
Mission control, Auckland, New Zealand and six years after lift-off, and Andrew Spraggon’s Sola Rosa project “Moves On”. The title of this latest CD is an explicit statement rooted in the reinforcement and of the Sola Rosa experience. It’s all about a bigger, more human sound achieved by the recruitment of a full band for both the recording and touring of “Moves On”. No more flying solo, at least, for now.

Your Crew Members
As tight as the proverbial drum, the Sola Rosa band members are all highly-experienced in their individual fields, and those of Dimmer, of Trinity Roots, of Chè Fu, of Nathan Haines, of Fat Freddy’s Drop, of Anika Moa, of King Kapisi … get the picture?
Drummer Will Scott and bassist Matt Short keep the beat neat and sweet and the groove forever smooth. Guitarist Ned Ngatae is a king of musical understatement. He’s been a participant at the New York-based Red Bull Music Academy and DJs as Killamanraro (aka Nedsta). He’s also been a 2004 APRA Silver Scroll nominee as a part of Dimmer. Moving and shaking, percussionist supreme, John Highsted is surrounded by thee most happening selection of congas and bongos, gourds and guiros.

With Special Guests And Ground Staff
Aiding and abetting Moves On you’ll find a top shelf of brothers and sisters. Number One Squire for Hire, Nathan Haines, drops in while Manuel Bundy scratches his way across a tune or three. The International Observer himself, Mr. Tom Bailey, steps in for a bit of co-production and also makes up a third of a downright fearsome keyboard team along with Steph Brown (also of The Krates) and the gifted Elia Gaitau (formerly with King Kapisi). While Tom and Steph are getting funky and righteous on the Fender Rhodes, the remaining wealth of analogue keys (synthesizer, organ, piano and clavinet) are coaxed into life by Elia. And finally, punctuating the offbeats, and we’ve got the living brass of Kim Patterson, Scott Towers & Fat Freddy’s Drop trombonist, Joe Lindsay.
Featured vocalist on “Badman” is former Sindecut and Jah Wobble sideman, Spikey Tee. Good company on account of his contributions to Bomb The Bass, Mannasseh, Mr. Scruff, Tony D, Morcheeba, and Marcus Intalex. He’s also a guest on Mark Rae’s debut solo LP, Rae Road.
“Breezes Blowing” is a feature moment for Paul St. Hilaire. Like the name, he’s exotic and Caribbean. This Berlin-based Dominican (already well-known as Tikiman) doesn’t perform with just anyone, but he has alongside Kruder & Dorfmeister, Stereotyp, Rhythm And Sound and Sola Rosa.
And that just leaves the souled-out stylings of Deva Mahal. Her sultry tones launched Moves On to the world with the single ‘Redeemer’. Part soul, part r’n’b and all the class you’d expect from a daughter of Taj Mahal. She’s also been singer-in-demand to Recloose and Fat Freddy’s Drop.

When We Were Young
The Sola Rosa story began long, long ago, in the formative mists of 1980s synth-pop and 1990s practice rooms, culminating in the pre-Sola band, Cicada.
However, washing dishes, wearing black and touring New Zealand can only sustain a body for so long, so with the new century breaking its waters and demanding wholesale change, Andrew gave the world the Sola Rosa “Starter for 4 EP”.
And what a change it was. Hand-made and hand-sold, all copies were successfully merged into discerning CD collections all over New Zealand. So now, the second release –traditionally more of a challenge – really had some work to do.
“Entrance to Skyway EP”, followed up in style garnering Andrew the Best Independent Release award at the New Zealand’s annual indie-radio awards, the b-Nets, before being re-released by Festival Mushroom Records and selling four figures nationwide.
One tune in particular, the hypnotic masterpiece, 'hi five', achieved massive airplay and appeared on the Round Trip Mars 'Sideways' collection of Auckland artists going “elsewhere”. The subsequent international release of that compilation (Different Drummer) has seen the track licensed to compilations worldwide and stirring up a storm on its own.


The Beat Goes On
Now safe in the arms of a record label, the debut album, ‘Solarized’ (FMR), was released in 2001 after eighteen months in the making. The album received excellent reviews, proving popular sales-wise on both sides of the Tasman, and winning Best Electronica Release at the “grown-up” New Zealand Music Awards. The second album, ‘Haunted Out-Takes’ (FMR, July 2003) was another award-winner, taking the Best Downbeat Release trophy at the 2004 b-Nets, as well as receiving excellent media reviews and figures to match.
Sola Rosa’s live presence became very much in demand, leading to festival and club dates at home and Australia. And where he couldn’t go, the labels lined up to licence tracks. Wherever you live, you can now check out Sola Rosa’s jet-setting reputation both on CD and vinyl, courtesy of the combined power of Ministry of Sound (UK/Australia), Guidance (US), Round Trip Mars (NZ), Different Drummer (UK) Stereo Deluxe (Germany) and Satellite K (Spain).

So there it is – a potted history of Sola Rosa. It’s always going to be a journey, but the scenery changes at every turn and the soundtrack just gets better. Standing still never did cut it – you gotta move on to find the best action.

Mixed by A. Spraggon and Angus McNaughton
Mastered by A. McNaughton